The project, which Neoen is calling the ‘Great Western Battery,’ would be Australia’s largest battery storage project by a long shot. The French renewables developer claims the project “would operate unlike any other device currently connected to the NSW network and would provide a range of services.” 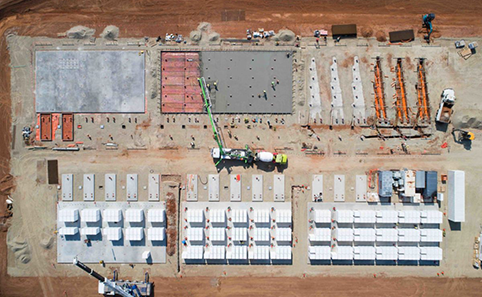 Revealed by planning documents filed on December 15, 2020, Neoen is seeking consent to construct, operate and maintain a Battery Energy Storage System (BESS) of 500 MW and up to 100 MWh at 173 Brays Lane, Wallerawang, New South Wales. It is also seeking to build a new transmission line that would connect the big battery to Wallerawang’s existing TransGrid 330 kV substation.

Neoen estimates the project will cost approximately $300 to $400 million.

Positioning itself to play a key role in the 12 GW of new renewable energy generation capacity planned by the state government for this decade, Neoen says the big battery is the key to unlocking future investment in, and uptake of, renewable energy in the state, solving existing grid limitations.

Neoen currently operates the world’s largest lithium-ion battery in Hornsdale, South Australia. Recently expanded, Hornsdale Power Reserve, also known as the Tesla Big Battery, has a capacity of 150 MW / 194 MWh. The Great Western Battery is planned to have at least triple the capacity.

In the submitted scoping study, prepared with the support of consultancy AECOM, Neoen says one of the project’s main project is to improve the resilience and sustainability NSW grid. “The large-scale BESS would reduce the possibility of load-shedding and blackout events in the State, especially considering the multiple existing coal-fired power plants that are planned to retire in the next decade,” the study says.

The proposed site, which about 110km west of Sydney, sits between the now decommissioned Wallerawang coal power station, the Springvale colliery, the Lidsdale coal loading facility, and the Wallerawang ash repository.

Neoen plans to connect its big battery to the 330kV substation which had previously served the coal power station, repurposing the infrastructure located about 1.25km from the proposed site.

The Great Western Battery is anticipated to take about one year to construct, requiring a peak of 150 to 200 workers. If, as anticipated, construction is able to begin by 2022, the big battery could be operational by 2023.

The plan tops off a huge year for Neoen. In 2020, the company was awarded a contract for a 300 MW / 450 MWh Victoria Big Battery to be constructed on the outskirts of Geelong as well as securing a 14-year contract with the Australian Capital Territory.